The Best German Potato Salad for a Picnic on the Patio

The patio on Trout Lily Hill is a fabulous space for entertaining, family picnics and just plain relaxing. this summer after 50 plus years, the patio is getting a little facelift. As I was looking at the work being done earlier this week, I thought about all of the meals that have been served in this space. One staple always on the menu is “Mom’s German Potato Salad”.  All of my guests have requested the recipe because they always comment, “this is the best potato salad”. That request is problematic as this family recipe was always stored in someone’s head and never written down. In fact this blog post is the first time this great picnic dish is appearing in print.

I never am intimidated about making anything else as long I have a printed recipe, but this potato salad thing was an obstacle despite numerous conversations and phone calls to my mom with the request, “How do you make German Potato Salad, it was a dish I never thought I could produce. As is the case with many handed down family recipes there were vague directions and lacking measurements and my mom doing her motherly thing always volunteered to make it. Finally I decided it was a necessity that I learn how to make German Potato Salad or it would be lost from our family heritage forever. I discovered that it is incredibly easy to make and can be prepared in different amounts. The tricks are in how the ingredients are handled and I am going to share all of those in this post. 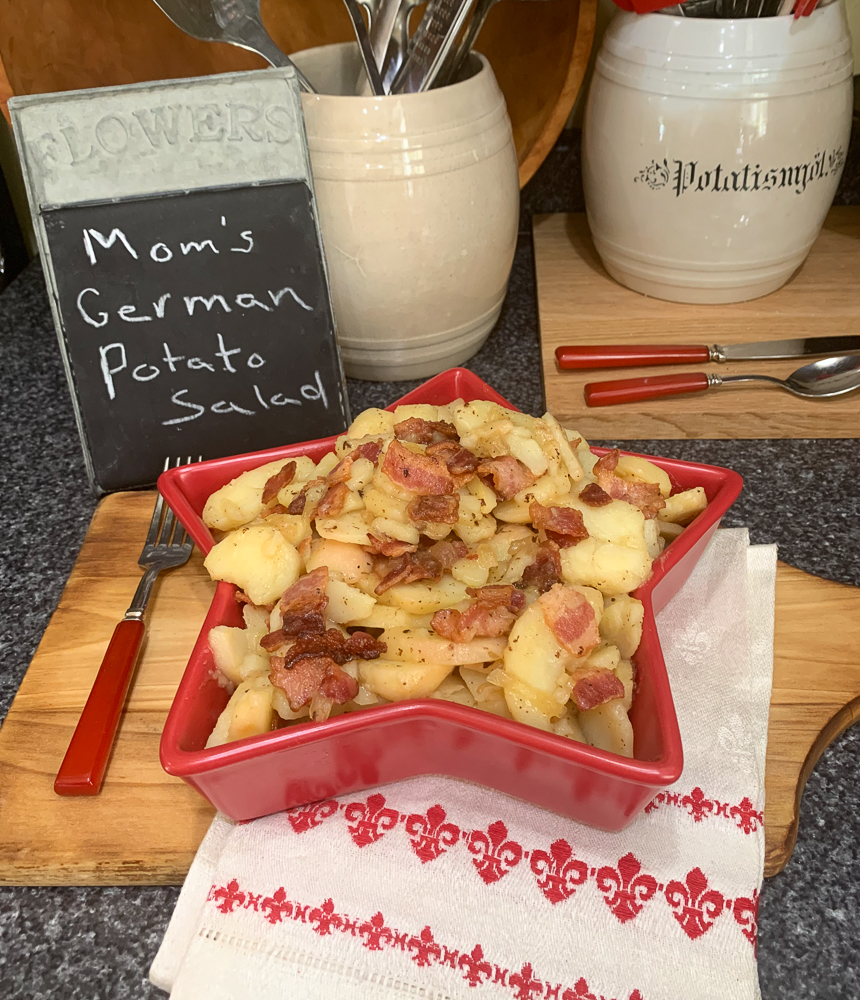 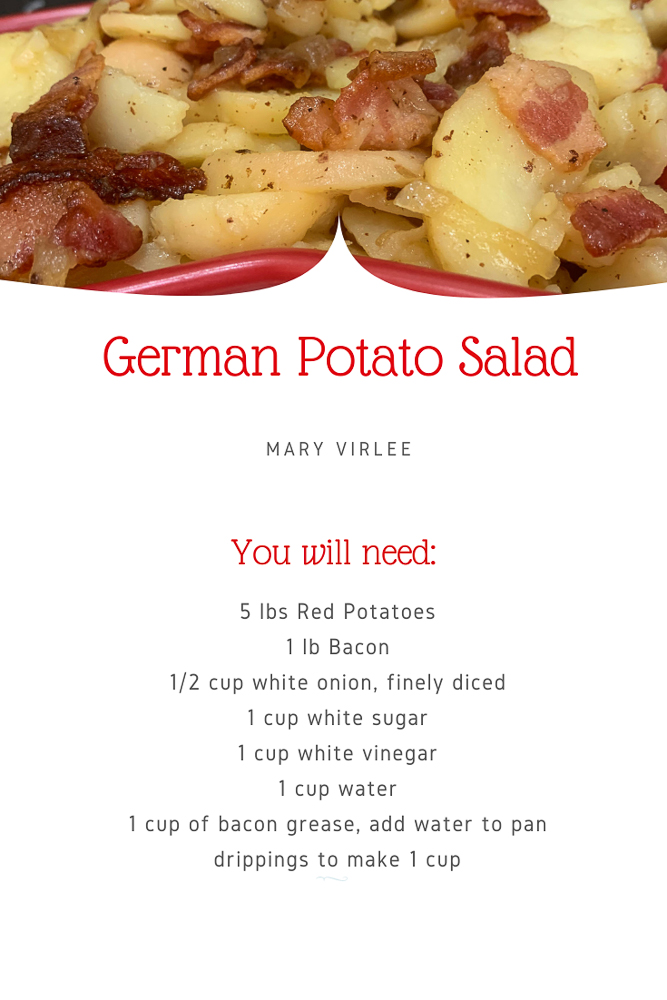 At the grocery store I try to select uniform size red potatoes. Boiling and cooking potatoes that are not similar in size results in some potatoes being mushy and others being not quite done. I usually select a medium size potato and definitely refrain from buying large red potatoes. Wash the potatoes and place them whole in a large kettle and cover with water.  My 5 quart dutch oven, holds 5 pounds of potatoes.  Boil the potatoes, until a fork is easily inserted but the potato still maintains it shape. It is best to use a gentle boil for the potatoes so as to not have them crack open as they cook. The cooking time is dependent on the size of the potatoes, but generally the time is about 10 – 15 minutes. Using red potatoes was one of my mother’s secret tips. Boiling them whole rather than cubing the potatoes to cook them is another tip for success. 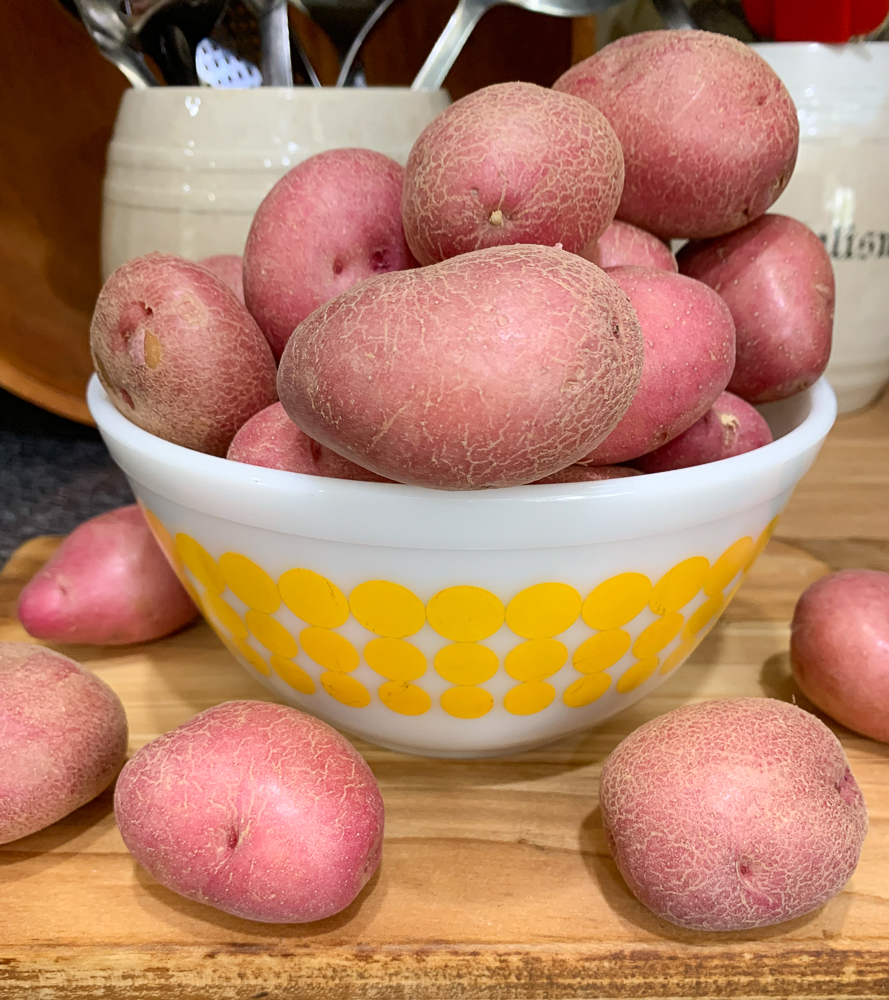 Once the potatoes are finished cooking, immediately drain the water off the potatoes, making sure there is no remaining water in the bottom of the pan. The potatoes tend to absorb that water and the bottom layer then would have a watery texture. Cool the potatoes until they are comfortable to handle. Remove the papery red skins from the potatoes with a small kitchen knife, sometimes I can remove the skins with my fingers. I peel all of the potatoes before I begin slicing them. Just an FYI, I never put the skins in the garbage disposal because when I was making 20 pounds of this for my daughter’s graduation party, I ended up calling a plumber to come and unblock a pipe on the day I was preparing all of the food for a crowd of 125 people. Life lesson learned!

I slice the potatoes into a low rectangular baking pan. The potato slices are approximately 1/4″ thick. This next step is very important. Slice a layer of potatoes on the bottom of the pan and then generously salt and pepper that layer. Slice some more potatoes over that layer and when the first layer is completely covered by new slices salt and pepper again. Continue this process until all potatoes have been sliced and seasoned. Cubed or diced potatoes do not absorb the flavors of the sauce. Do not use cubed or diced potatoes as a shortcut. 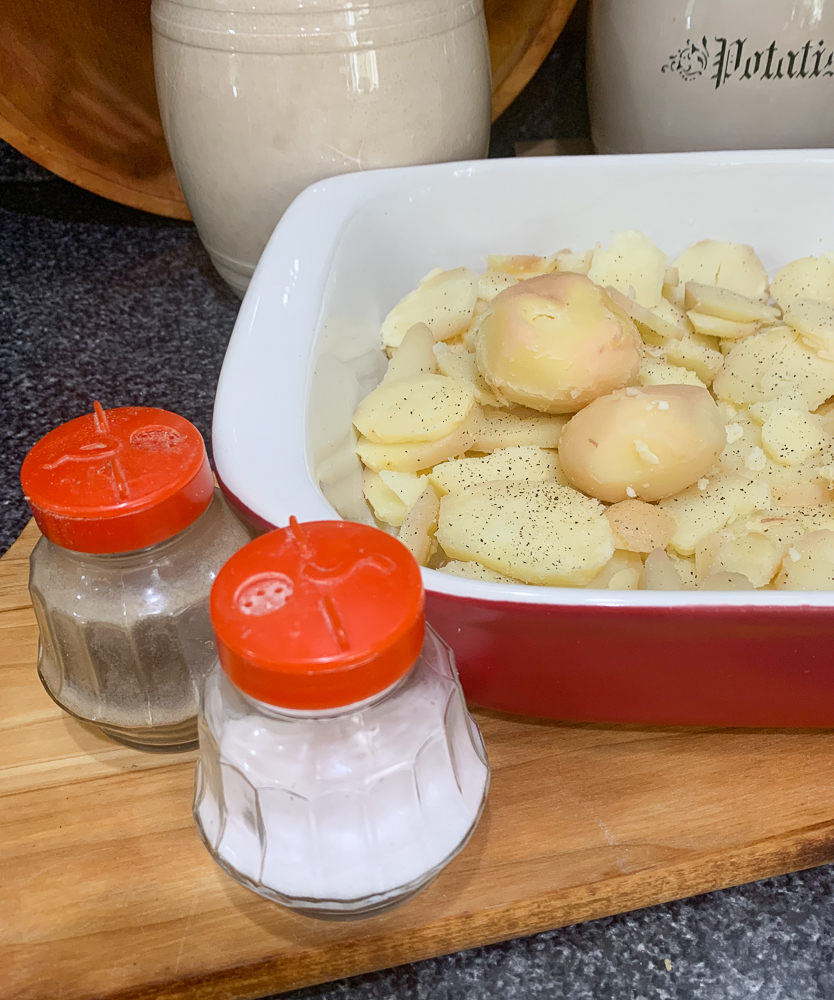 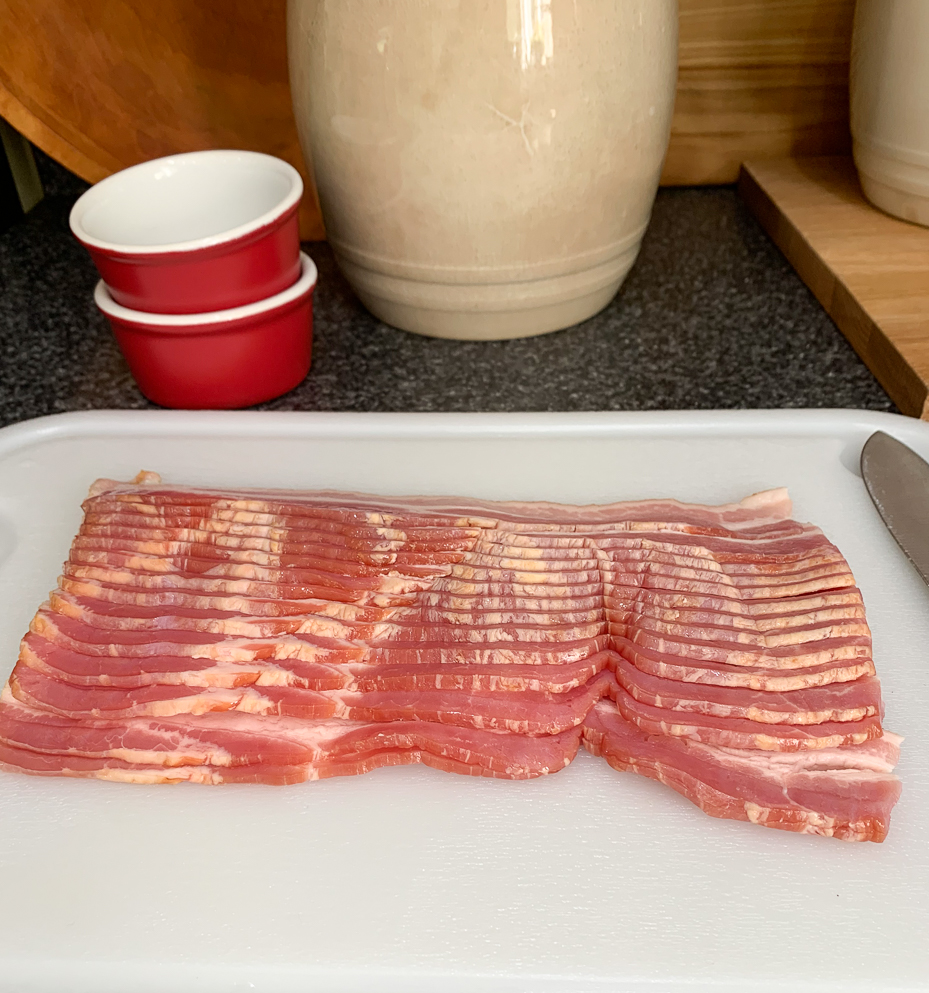 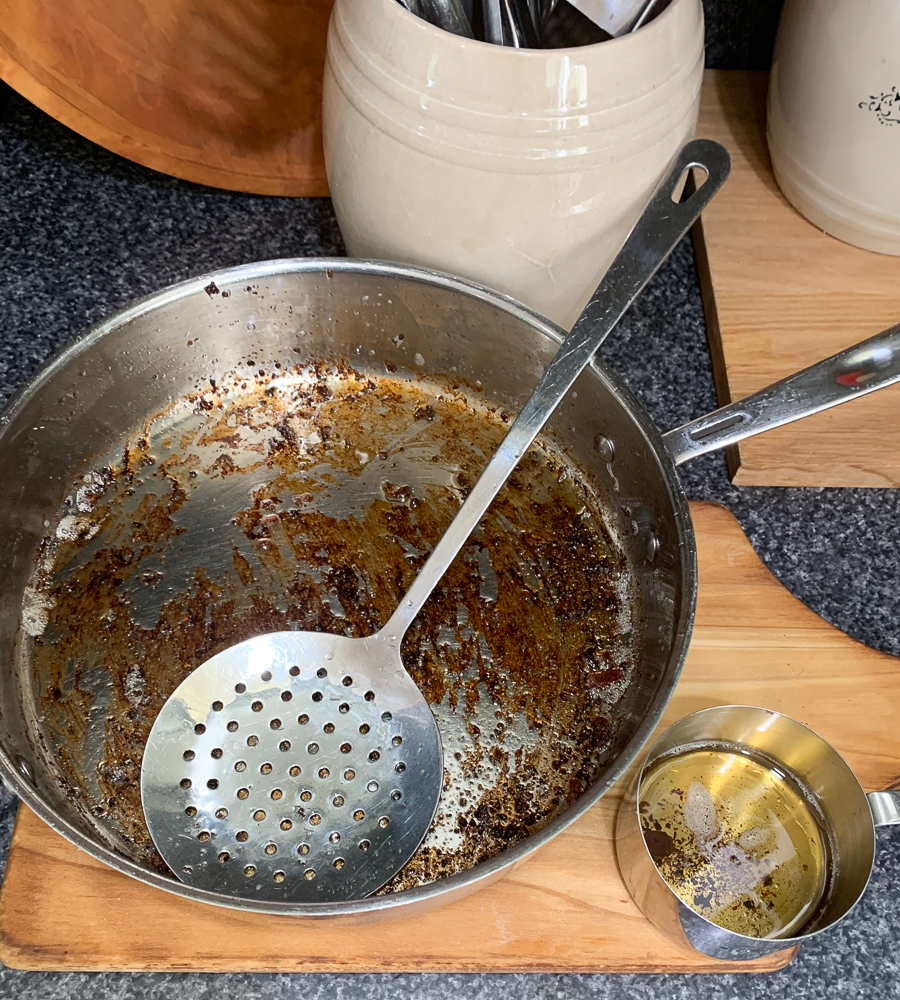 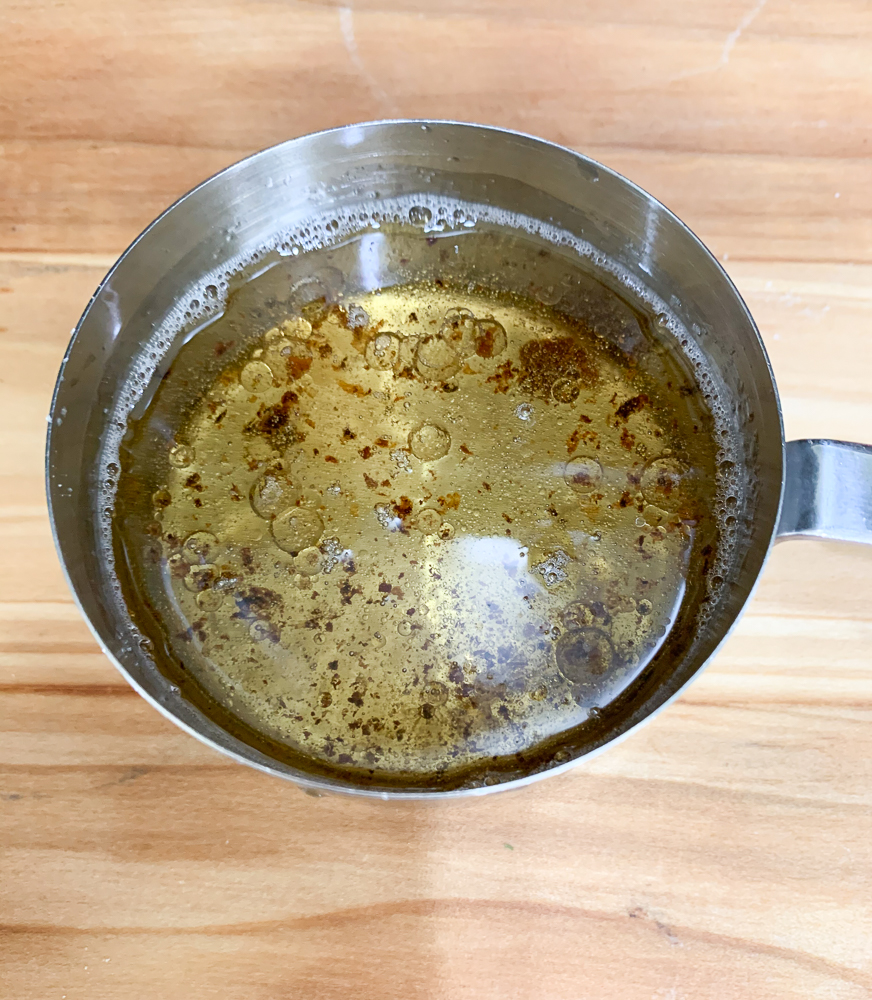 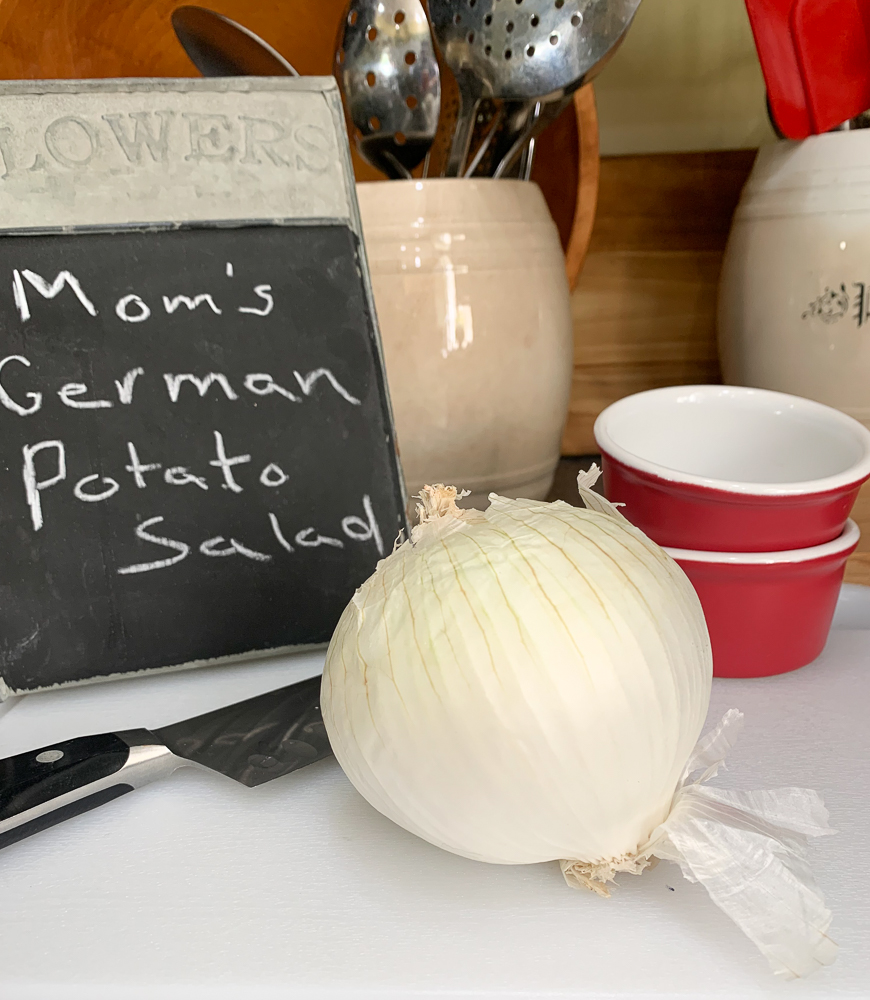 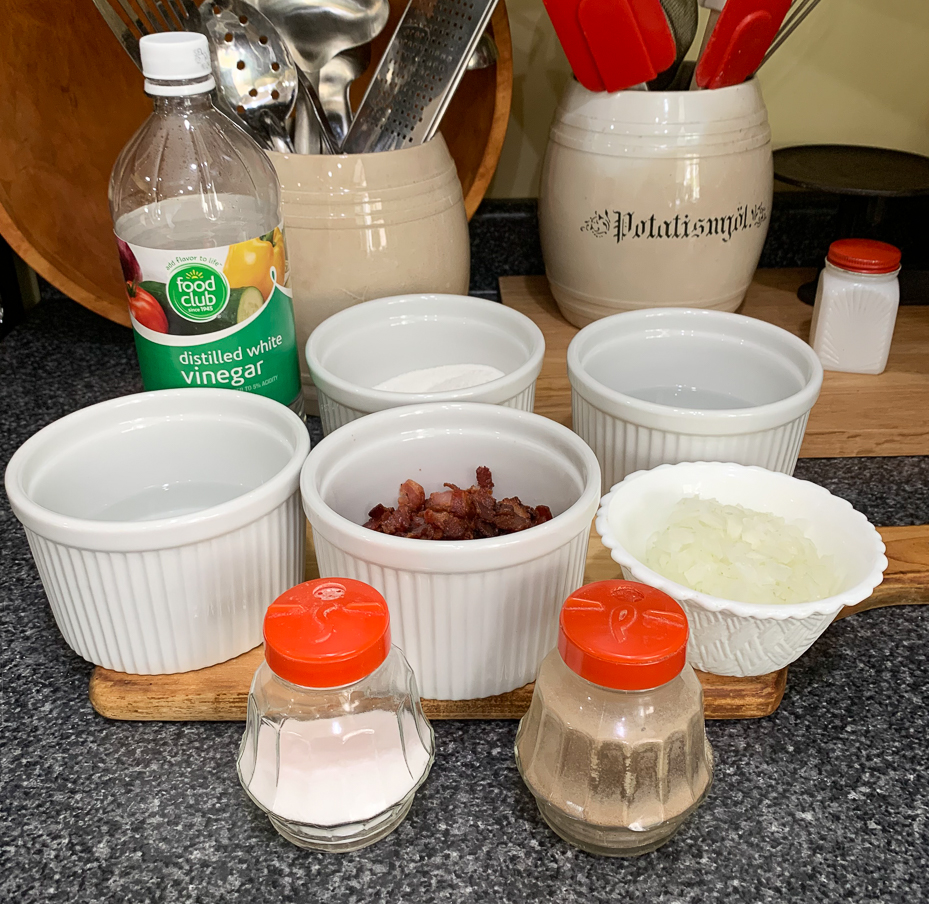 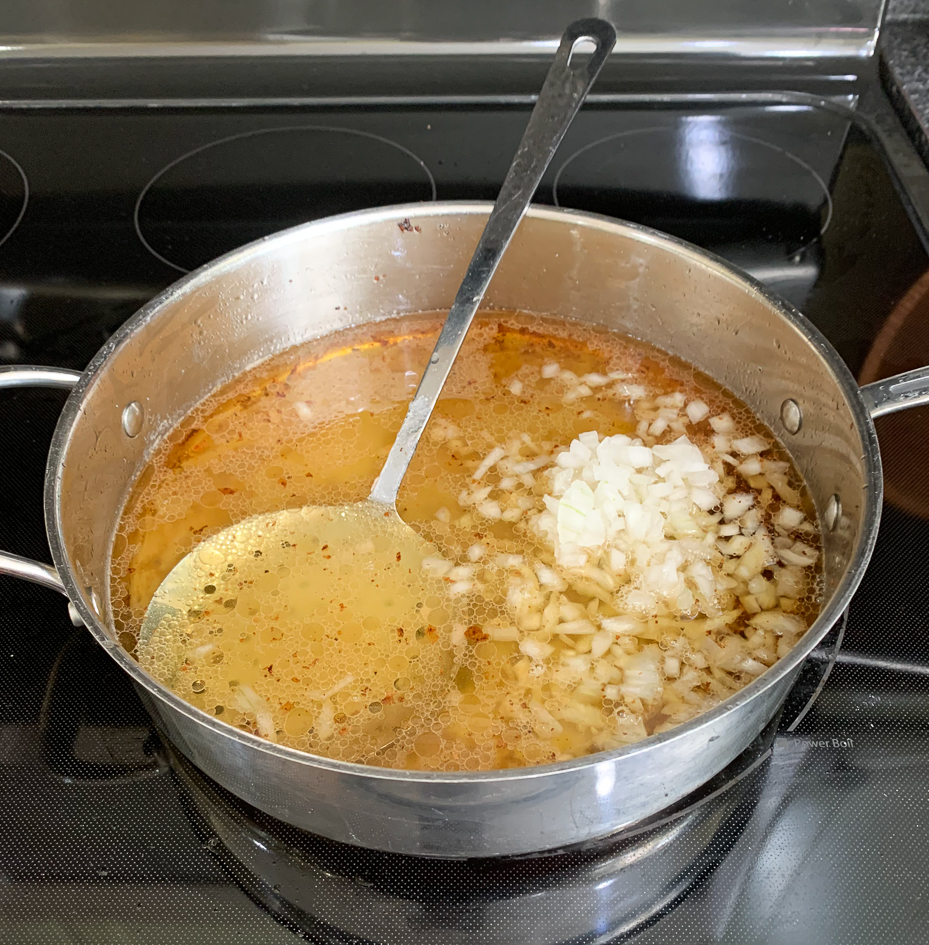 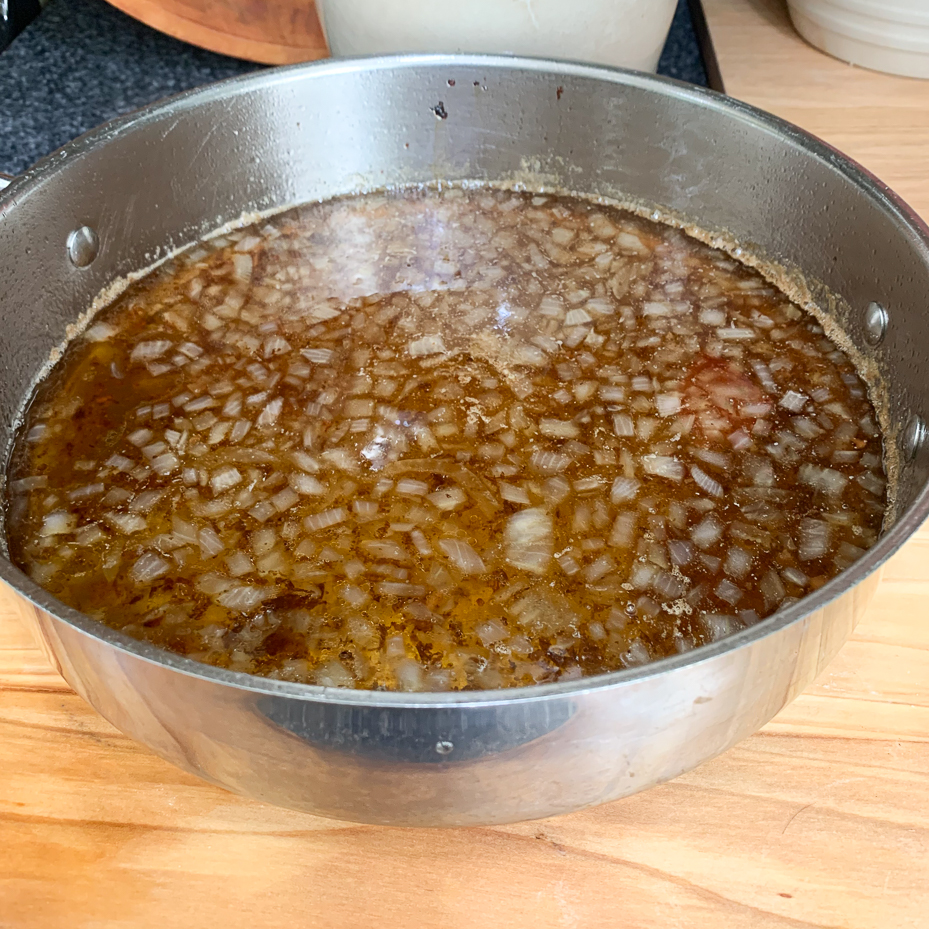 After the sauce mixture has cooked. Sprinkle the cooked bacon pieces over the sliced potatoes and carefully pour the hot sauce mix over the potato mixture. Gently stir the potatoes using a folding action until all potatoes are covered with sauce. Cover the pan with aluminum foil and place in the oven at 250 degrees for 30 minutes, stirring twice through the heating process. When the sauce is first poured over the potatoes it may seem watery, but the natural starches from the potatoes thicken the sauce perfectly. remove from the oven and serve. 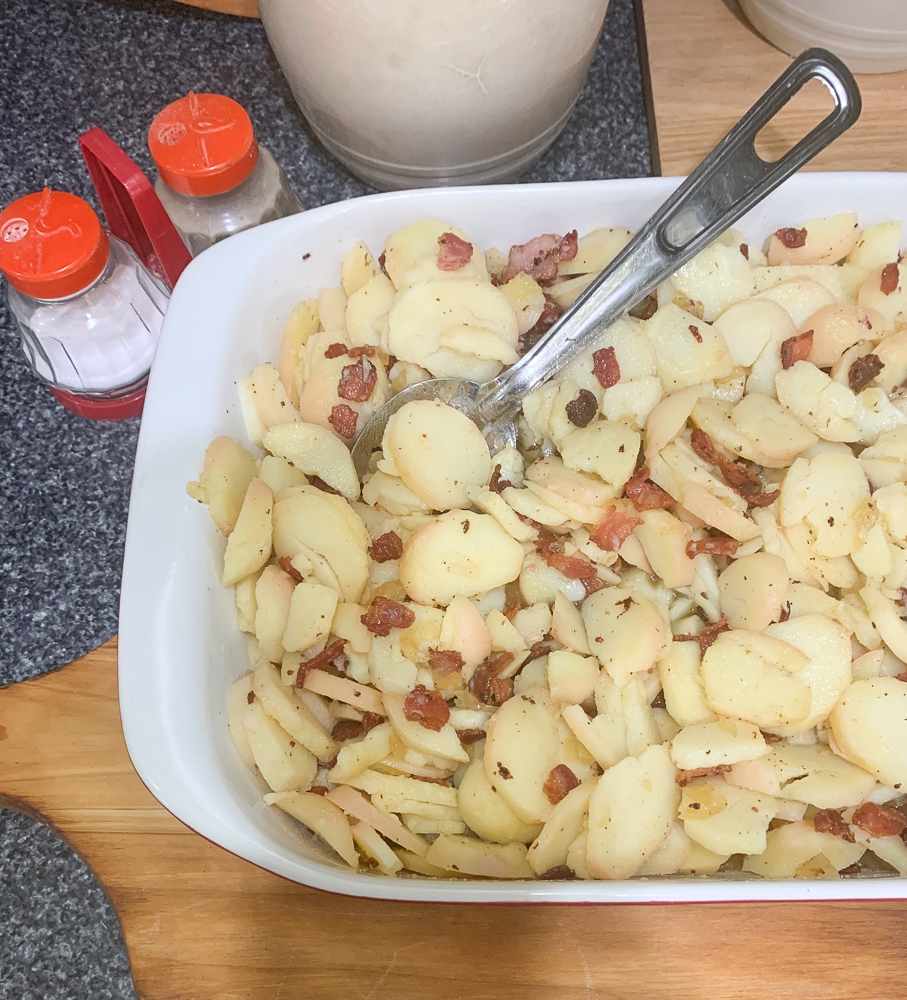 This is truly the best German Potato Salad I have ever eaten. My daughter had me make this several times for her to take back to college with her because her friends loved it for a midnight snack. If I am asked to bring a dish to pass to a party, I am always asked to make the German Potato Salad. I don’t mind because it is super easy and so tasty! 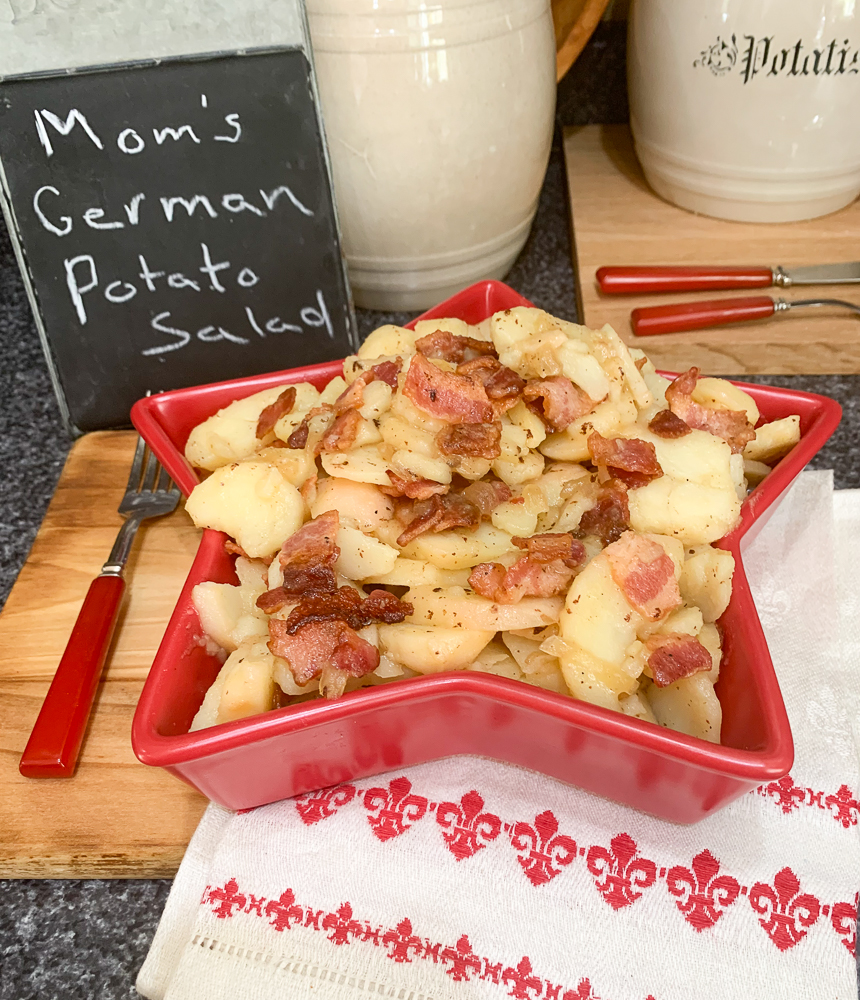 The tricks are: use only red potatoes, slice the potatoes, salt and pepper in layers, and create the sauce using equal parts of water, sugar, white vinegar and bacon grease brought to volume with water. If I make this recipe for a smaller gathering I use 3 pounds of potatoes and a generous half of a pound of bacon, and then use 3/4 cup of all of the rest of the ingredients with the exception of the diced onions. Thus there were no magical techniques to this family recipe, so hopefully with me sharing this recipe, my children and family members will never have to ask, how to make German Potato Salad. If you like family recipe favorites, you can find a recipe I often use for a dessert on the patio here. 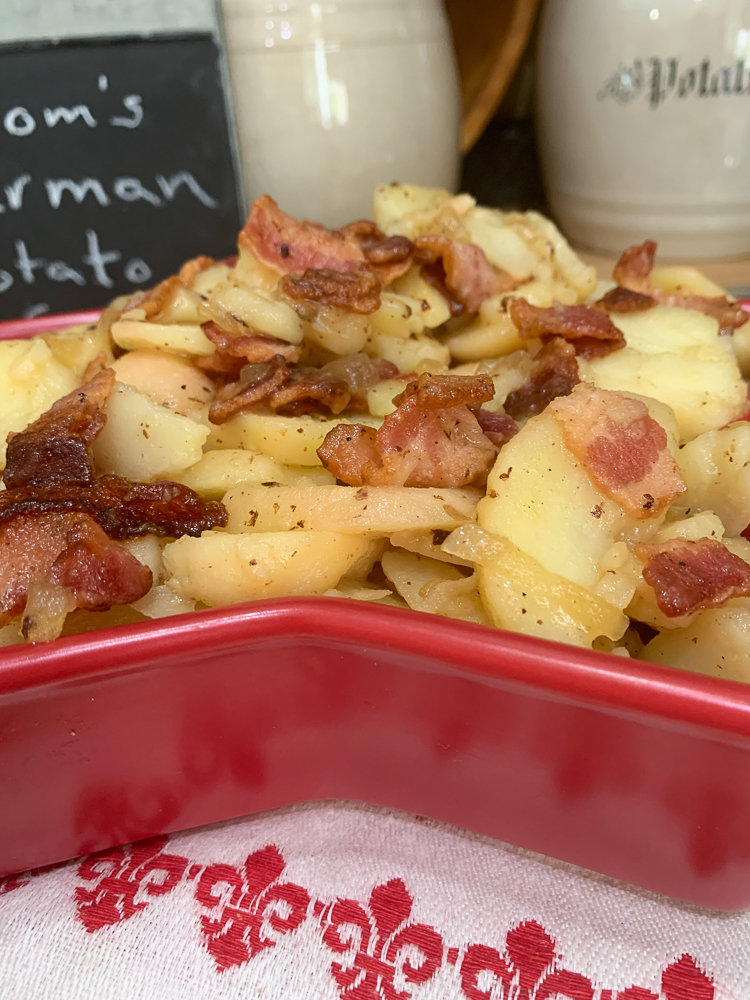 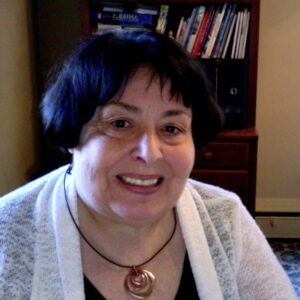 Blogging about life on Trout Lily Hill will allow me the opportunity share all of my tips and ideas for creating great family memories in the place you call home.